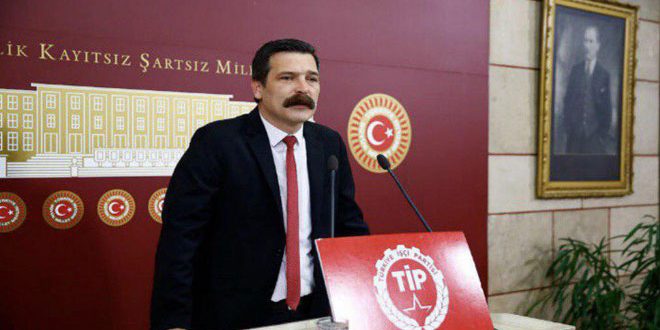 Ankara, SANA- Head of the Turkish Workers’ Party (TIP) Erkan Baş has affirmed that President of the Turkish regime Recep Tayyip Erdogan is an “American project”, and Washington has brought him and his Justice and Development Party (AKP) to power.

During a press conference at the Parliament on Wednesday, Baş noted that the US and through brining the Justice and Development Party (AKP) to power is seeking to eliminate the secular regime and to establish a rotten reactionary regime that would govern Turkey with an absolute authoritarianism.

He referred to the dangerous policies which have been adopted by Erdogan since he came to power, saying “Erdogan has destroyed everything in the internal and foreign policies, and he has undermined the simplest standards of the democracy and human rights and he has put all of his opponents, particularly the journalists in the jails.”

Baş also talked about Erdogan’s contradicted foreign policy, particularly regarding the crisis in Syria, adding that he always talks about the unity and sovereignty of Syria, yet he continues his aggression on its territories and he supports the armed terrorist groups in an outrageous and dangerous violation of Syria’s sovereignty.

The events and developments over the past years have proven the involvement of Erdogan’s regime and his government in supporting, funding and arming the terrorist organizations in Syria, in addition to making Turkey a corridor for the passage of tens of thousands of terrorists who came to Syria from different parts of the world.