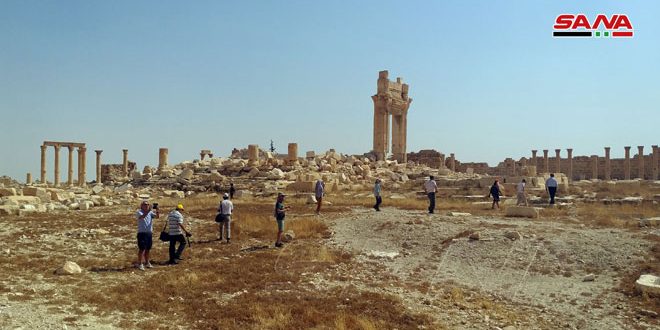 Palmyra, SANA- Palmyra, bride of the desert, today is attracting more foreign tourists who come to see the archeological city which enjoys a prestigious position in the humanitarian and cultural history and to get acquainted with what it has went through of systematic destruction at the hands of Daesh (ISIS) terrorists.

After two years of liberating Palmyra from terrorism thanks to the heroism and sacrifices of the Syrian Arab Army, nowadays, tourists are arriving in the city overwhelmed with happiness to see it and to tour its archeological landmarks, while at the same time they feel sorry for the systematic destruction and sabotage which affected some of the city’s edifices.

They expressed full confidence that the bodies concerned in Syria and the international bodies will work on restoring the previous status of the city.

Tourist delegations that include specialists, researchers who are interested in the international humanitarian heritage, artists and journalists have visited Palmyra over the past few months to get acquainted with its history and to inspect its archeological monuments.

Tourist Gabriel Desibera who is a manager of a civil airport in France said in a statement to SANA’s reporter “I came with a French tourist group to visit the archeological monuments in Palmyra and to inspect the damages inflicted on some of its parts due to the attacks launched by Takfiri terrorists.”

“What has been done by the enemies of culture and science and the damages they inflicted on the heritage of the richest historical city in the world is a shame on all humanity, particularly as Palmyra is considered the cradle of cultural innovation…Palmyra with the charm of its buildings and decorated arches narrates the history of its queen Zenobia,” Desibera said.

He added that Palmyra is equal in its importance to the most important archeological sites in the world, and maybe it is more beautiful as its monuments which spread in a vast and integrated archeological area are like a large open-air museum.

For her part, tourist Even said ” The archeological city of Palmyra enjoys a wide fame and a prestigious historical and cultural position as it is the an ancient oasis where palm and olive trees grow in the heart of the desert…I was really amazed when I saw that unforgettable spectacular scenery.”

She added ” The brutality of extremism which usurped some of the city’s beauty and its unique architectural style entails exerting relentless efforts by the international organizations to restore the elegance to its archeological monuments which are on the list of the UNESCO World Heritage.

2019-09-22
ruaa-jazaeri
Share
Previous Thousands of ancient and unique stamps at an exhibition in Homs
Next Sunday weather: Temperatures to drop, weather cold at night