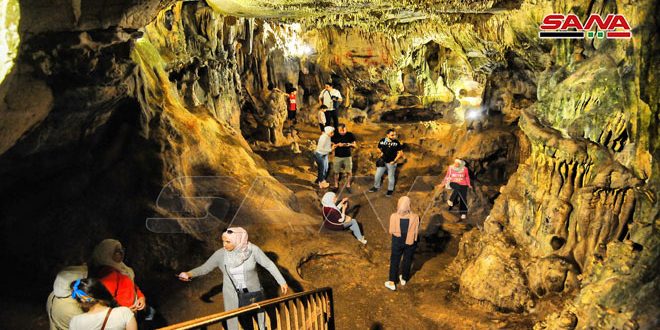 Tartous, SANA- Al-Dawwayat cave in Mashta al-Helu in Tartous coastal province is a natural cave that was formed from more than 2 million years ago.

The cave is famous for its charming beauty as the stalactites and stalagmites have created unique natural shapes.

A stalactite is an icicle-shaped formation that hangs from the ceiling of a cave, and is produced by precipitation of minerals from water dripping through the cave ceiling. Most stalactites have pointed tips.

Meanwhile, a stalagmite is an upward-growing mound of mineral deposits that have precipitated from water dripping onto the floor of a cave. Most stalagmites have rounded or flattened tips.

“Al-Dawwayat” in the Syrian colloquial dialect is the plural of the word “light” as the name of the cave came due to the fact that there are holes in its ceiling through which light passes and lightens up the entrance of the cave.

2019-07-07
ruaa-jazaeri
Share
Previous Darroch : Trump “inept”, “incompetent” and his “career could end in disgrace”
Next Authorities seize a large amount of narcotics south of Damascus