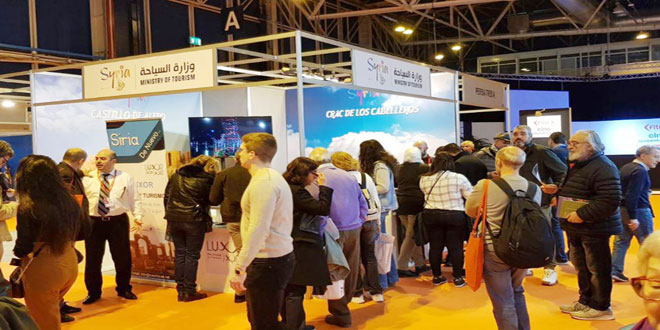 Madrid , SANA – The Syrian pavilion in the 39th Fitur 2019 international tourism fair held in Madrid, Spain, has witnessed a high turnout of visitors in an indication of Syria’s recovery from terrorism and its return to participate in international fairs and to the global tourism scene.

Syrian travel and tourism companies, the Syrian Airlines, and the Syrian Transport and Tourism Company participated in Fitur fair.

Syria’s participation in the fair also included visits to various pavilions of international hotels in order to coordinate for the future and keep up with developments and new investments.

He also called on the Spanish media to visit Syria to see first-hand the return of safety in the country and the progress of the reconstruction efforts.

Martini said Syria’s participation in the fair carries a message of peace to the peoples of the world.

For his part, Director of the Syrian Transport and Tourism Company, Fayez Mansour, emphasized the importance of participation in the fair in terms of promoting plans and programs for revitalizing tourism in Syria, which would contribute to restoring Syria’s position on the international tourist map.

Fitur 2019 will continue till Sunday tomorrow. It is being held at IFEMA Trade Fair Center in Madrid with the participation of Syria and 165 other states, and more than 10 thousand international tourism companies.

Fitur is one of the most important tourist fairs in the world, as it provides an annual platform for delivering key proposals, presentations, and strategies, which will be developed throughout 2019. It represents an international forum for official tourism sectors in various countries and major tourism companies to determine the future trends for the tourism sector.

Damascus, SANA- Churches’ council, heads of churches and the religious references called upon the US …