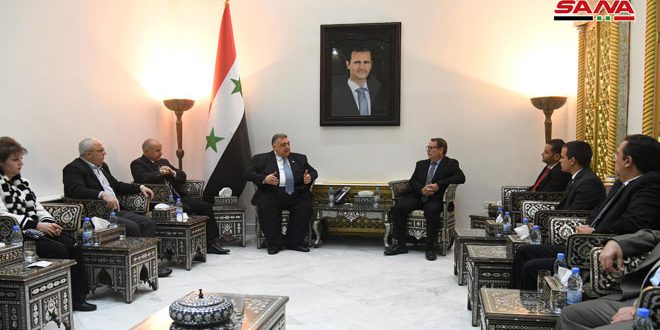 Damascus, SANA – People’s Assembly Speaker Hammoudeh Sabbagh stressed during his meeting with Cuban Ambassador to Syria Miguel Porto Parga the importance of boosting the historic relations between the two friendly countries and upgrading bilateral cooperation in all spheres.

Sabbagh called for intensifying joint work between Friendship Association in the People’s Assembly and the Cuban National Association, in addition to increasing the exchange of visits in a way that serves the interests of the two countries.

For his part, the Cuban Ambassador lauded the steadfastness of the Syrian people in confronting terrorism which is backed by more than 100 states, clarifying that the whole world should thank Syria for its resilience in the face of terrorism, which threatens all states.

He expressed his country’s firmness in confronting all the Western dictates on peoples of the region, in addition to continuing to provide support to the Syrian people in light of the crisis.

He also expressed conviction that Syrian will achieve the final victory against terrorism.