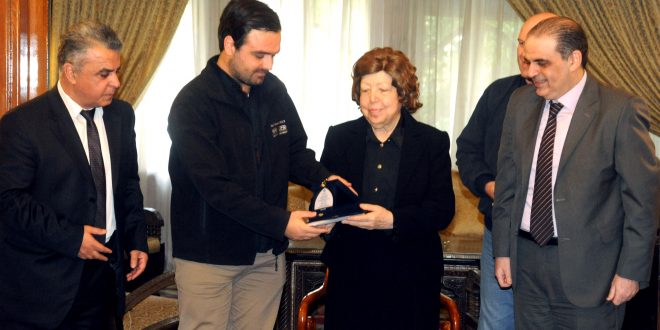 Damascus, SANA – Vice President Najah al-Attar honored the Syrian Virtual University (SVU) team, Radio Active, for winning cup of the 20th software contest, which was held in the Egyptian city of Sharm El Sheikh from 8th to 11th of the current month.

Dr. al-Attar, also Chairman of SVU Board of Trustees, expressed pride over the achievement, clarifying that informatics has received considerable attention from President Bashar al-Assad through his pursuit to introduce IT and internet to the society.

Chairman of Syrian Software Competition, also coach of the winning team, Dr. Jaafar al-Khayer said that the honoring constitutes a motive for the team to make more achievements and fulfill their aspirations.

SVU Rector Dr. Khalil Ajami said that five Syrian teams including the winning team out of 15 Arab teams were qualified to the Global Software Contest, which highlights our excellent education system despite all challenges.

Member of the team, student Jude Zozo expressed pleasure of the achievement, saying it is an outcome of efforts and training over several months as well as the strong will for gaining the best results.

70 universities participated in the Arab finals from 11 countries represented by 130 teams, with Syria’s results being on top generally. Nine Syrian teams from eight universities ranked among the top 20 teams in the finals.

Syria is to participate in the world finals with five teams from Damascus university, SVU, Aleppo University, al-Baath University and Higher Institute of Applied Sciences and Technology.