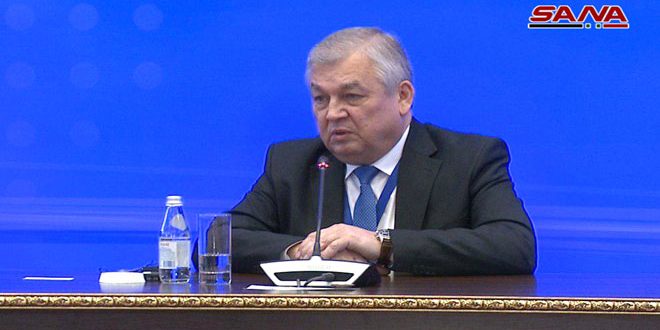 Lavrentiev’s remarks came during a press conference held on Thursday at the conclusion of Astana’s 11th meeting on Syria.

“There are over 15,000 Jabhat al-Nusra terrorists in Idleb and that is unacceptable,” Lavrentiev said , adding that We repeatedly warned the international community against the large number of the terrorists which have chemical materials and they could use them against the civilians. That has happened in Aleppo recently and we wonder why the Western countries ignored the attack.

Lavrentiev expressed Russia’s readiness to provide all the possible help, including the necessary support to the Syrian Arab Army, to resstablish stability to Idleb province.

the fight against terrorism in Syria is continued until the terrorist organizations are completely eliminated, Lavrentiev emphasize.

He expressed Moscow’s concerns over the illegitimate presence of the US troops in Syria.

Lavrentiev reiterated that Russia demanded Organization for the Prohibition of Chemical Weapons (OPCW) to send experts to Aleppo to investigate into the terrorist incident of targeting the city with shells containing chemical substances.

The Syrian government has created convenient circumstances for the return of the displaced Syrians home as the number of the displaced who are willing to return home is increasing, demanding the Western countries, especially the US not to politicize the issues of reconstruction in Syria and the entrance of humanitarian assistance to it.