President al-Assad: We paid a heavy price to preserve our homeland and independent decision 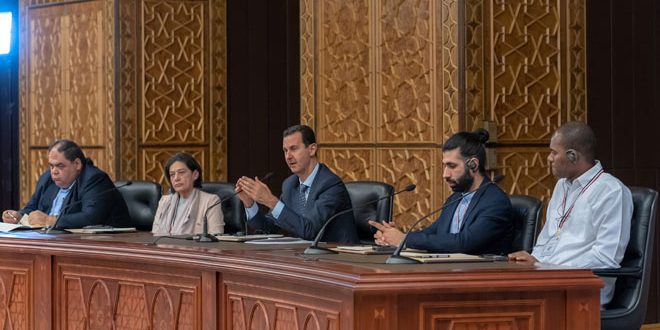 At the beginning of the meeting, President al-Assad thanked the participants for their stances in support of Syria and their unflinching solidarity for the Syrian people since the beginning of the war, considering that the founding principles of the World Peace Council and its sought-for goals can bring about world in which more safety and justice prevail for the coming generations. 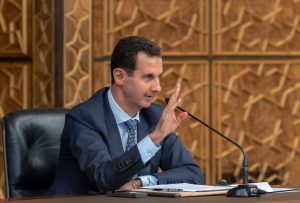 The President considered that the weight of the World Peace Council and the World Federation of Democratic Youth lies in their adherence to their principles in defending truth and embodying the principle of peace at a time when international policies are built on lies and deception.

The President indicated that the world needs these organizations and parties especially amid attempts by some superpowers to turn international organizations into tools to strike stability and push for destruction instead of exerting efforts to consolidate peace and stability in the world. 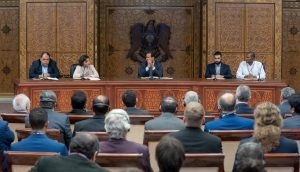 Defending principles exacts a price, the President affirmed, citing Syria which paid a heavy price to preserve the homeland and independent decision.

“When principles are realistic and based on the will and interests of nations, they constitute a solid basis in the face of the narrow interests of some Western states who have never refrained from igniting wars to realize their goals by spreading the extremist ideology which was marketed by the US administration in the 1980s and promulgating ignorance in a way that plunges peoples into wars and through spreading poverty in the world,” added the President.

Maria do Socorro Gomes, President of the World Peace Council, for her part, condemned the crimes against the Syrian people which “have shown the world the stances of the imperialist states towards peace and the sovereignty of nations,” affirming that the Council’s members will exert all efforts to unmask the true face of the terrorist war against Syria.

Head of the World Federation of Democratic Youth Iacovos Tofari said holding the meeting in Syria carries a clear message of solidarity with the Syrian people against the war waged on them.

The members, for their part, expressed support for the Syrian leadership, army and people, voicing trust in the ability of the Syrian people to seal a decisive victory.