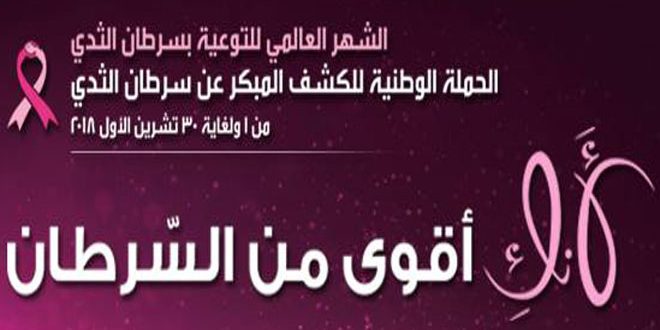 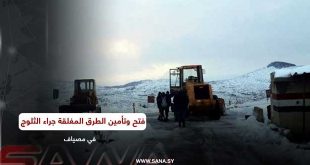 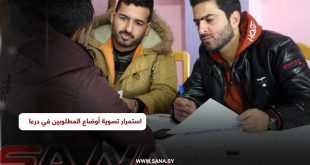 Damascus, SANA – More than 132 health facilities and civil society associations has joined the National Campaign for Early Detection of Breast Cancer which is held in parallel with the Breast Cancer Awareness Month.

The “Because You Are Stronger Than Cancer” Campaign, which will last till the end of October, includes providing free medical and radiological examinations for women and awareness and educational activities.

As part of the Campaign, women over the age of 40 can have free medical examinations without the need for referral, registration, or clinical examination from tomorrow until the 31st of this month.

The Campaign centers are distributed in 46 centers in Damascus and its Countryside, 30 in Homs, 14 in Lattakia, 12 in Aleppo, 9 in Hama, 7 in Tartous, 5 in Sweida, Daraa, 2 in Quneitra, and one in each of Hasaka and Deir Ezzor.

Vice Chairman of the Syrian Society for Breast Diseases Samia Kanj told SANA that the Campaign aims at educating women about the risks of breast cancer and the importance of periodic screening for early detection, as well as teaching them about self-examination and providing free medical and clinical examinations through the campaign centers in the provinces, in addition to providing medical support to women whose situation require immediate treatment.

Breast cancer is the most common cancer among women locally with 30 percent according to the National Cancer Registry at the Ministry of Health.

In October, several countries around the world go pink to remind women of early detection of the breast cancer which is considered as the most common type of cancer among women and the fifth most common cause of death with about 1.7 million new diagnosed cases annually and 571,000 deaths, according to the latest global statistics.

In 2018, there were over 2 million new cases around the world..
According to the World Cancer Research Fund, the survival rates among women with breast cancer have generally improved, although they vary from country to another due to early detection rates, access to appropriate medical care, and improved treatment strategies.

2018-10-02
Manar
Share
Previous Al-Moallem: Syria is writing the last chapter in the fight against terrorism
Next Weapons and ammo left behind by terrorists in Hama, Sweida and Deir Ezzor discovered