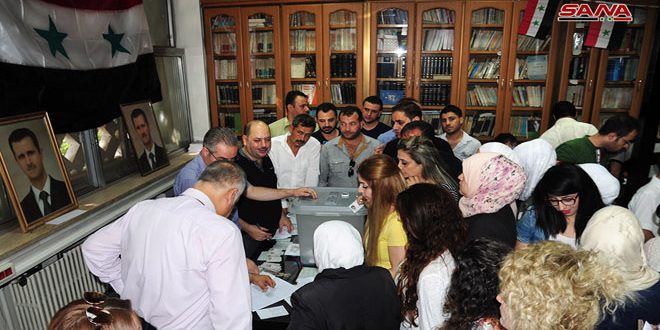 Damascus, SANA- Elections for Local Administration Councils kicked off on Sunday morning with the participation of more than 40,000 candidates competing for 18478 seats.

After the opening of the polling stations at 7:00 am, citizens began to cast their votes, expressing desire to participate actively in this constitutional event which will strengthen the powers of local councils and achieve balance in the development process through the powers given by the local administration law to the councils of provinces, cities, towns and municipalities.

In Damascus, the polling stations witnessed a good turnout hours after they were opened.

Speaking to SANA, President of the Judicial Sub-Committee for the Elections of Local Administration Councils in Damascus Khadija al-Hoshan said that the elections are conducted in a direct and confidential manner through which the citizens express their role in power and society, pointing out that the Local Administration Councils are concerned with all actions that will develop services at various cultural, social and urban levels.

The number of constituencies is 88 at the governorate level with 6551 electoral stations, according to the Ministry of Local Administration and Environment.

According to Article no.125 of the Constitution, the local councils are institutions through which citizens exercise their role in the sovereignty, state building and society leadership.