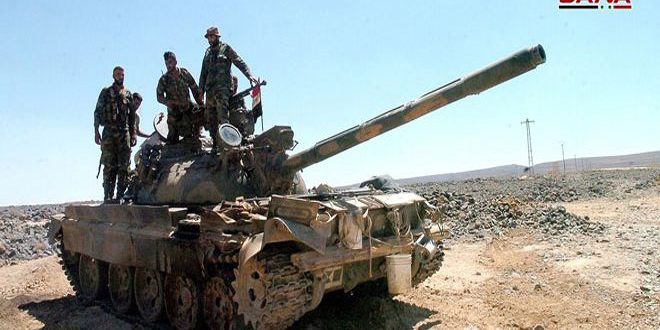 Sweida, SANA- Army units, in cooperation with the supporting forces, expanded control over new areas in the northern and northwestern part of al-Safa hills in the depth of Sweida Badyia (desert).

SANA reporter in Sweida said that army units operating in Abu Ghanem hill to the northeast of al-Safa hills established control over wide areas in the direction of Um Marzakh to the west to meet with the forces which are coming from the western direction amid a state of collapse among the ranks of Daesh (ISIS) terrorists after eliminating a large number of them and destroying their positions and equipment.

The reporter added that army units operating in the surroundings of Qabir al-Sheikh Hussein continued to enhance their presence and to expand their control towards al-Safa hills, killing scores of Daesh terrorists and injuring others.

The reporter indicated that army units carried out precise bombardments against positions and fortifications of the remnants of Daesh terrorists in al-Safa hills.

2018-08-30
ruaa-jazaeri
Share
Previous Decree establishing Faculty of Health Sciences at Damascus University
Next Minister al-Moallem: The US, France and UK want to carry out a triple aggression on Syria in order to shore up Jabhat al-Nusra