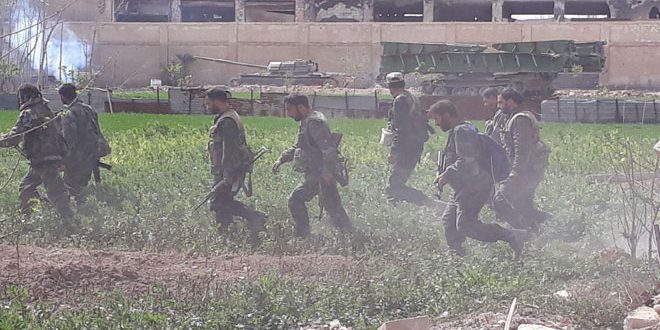 SANA’s correspondent in Eastern Ghouta said that the army units operating in the direction of Ein Tarma in the southern sector of Ghouta carried out, over the past hours, intensive operations in Ein Tarma area, regaining full control over Ein Tarma Valley after defeating terrorist organizations in it.

The military operations are currently concentrated on the outskirts of Ein Tarma, where the Syrian Arab Army is using tactics and weapons commensurate with the residential areas in order to protect the lives of civilians and their properties, according to the correspondent.

The terrorist organizations suffered heavy losses as a result of the rapid advance of the army in the area.

Army units launched swift and precise operations in the Valley in order to serve as stepping stone for liberating the areas of Zamalka, Hazza, Erbin and parts of Jobar neighborhood from terrorists.

A field Commander said that after the restoration of Ein Tarma farms, the army is combing the area to dismantle IEDs and mines in order to strengthen its military posts and uncover the tunnels.

The Commander added that army is currently advancing to retake Ein Tarma town as it is tightening the grip on Jobar area, adding that clashes are taking place on the outskirts of Aswaq al-Khair.

Army units will continue advancing till liberating the entire area of Eastern Ghouta from terrorist organizations.