Over 5000 civilians leave Eastern Ghouta, army units receive them and provide their needs 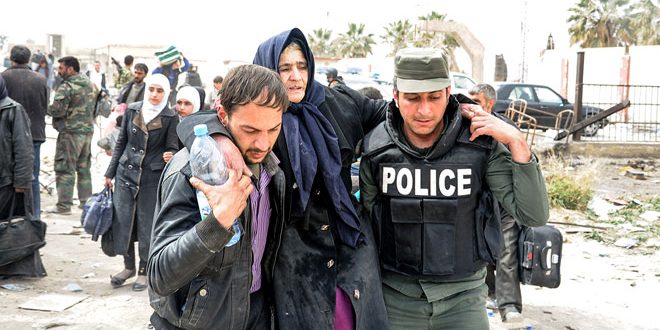 Damascus countryside, SANA- Thousands of besieged civilians who were used as human shields by terrorists have managed to leave Eastern Ghouta.

SANA reporter said that over 5000 civilians, mostly children and women, on Sunday exited Eastern Ghouta through the safe corridors, as Syrian Arab Army units secured their exit to safe areas were prepared to receive them.

The reporter added that the army units and the SARC personnel immediately provided the evacuated civilians with their needs in preparation to transporting them to temporary housing centers equipped with all necessary requirements.

A number of evacuated civilians called on the rest of the people in Ghouta, to stand up to terrorists and immediately head for the points of the Syrian army.

In a relevant context, SANA reporter said that army units started to comb Saqba town to dismantle explosives left by Jabhat al-Nusra terrorists and linked groups after eliminating their last hotbeds in it.