Churkin: US strikes at ISIS in Syria without consent from Syrian government would hinder international efforts to counter terrorism

Moscow, SANA – Russian Ambassador to the UN, Vitaly Churkin warned against the US decision to launch air strikes at the positions of the Islamic State in Iraq and al-Sham (ISIS) in Syria without consent from the Syrian government.

” This  decision will complicate international efforts in countering terrorism,” Churkin said Wednesday as he spoke live on the Rossiya’24 news channel, adding that the decision’s implementation will pose problems for Russia as well as for many other countries respecting international law, including China.

Churkin warned that the current western campaign against Russia would add more new complications to the international community’s efforts to counteract ISIS. 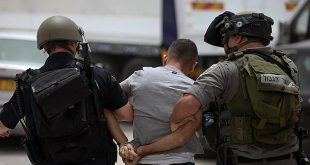 Occupied Jerusalem, SANA- A Palestinian was arrested on Monday by the Israeli occupation forces in …