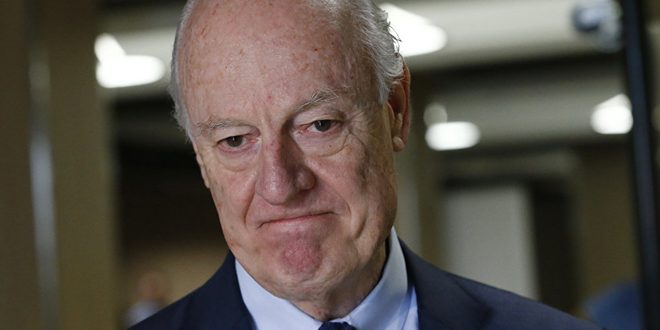 Geneva, SANA – The UN Special Envoy for Syria Staffan de Mistura called for holding a new round of Syrian talks in the Austrian capital of Vienna on January 25 -26.

According to Reuters news agency, de Mistura’s Office said in a statement that “The Special Envoy sent separate invitations to the Syrian Government and “the opposition” for a special meeting with the United Nations in the framework of the United Nations-facilitated Geneva political process, adding that it will be held on the premises of the United Nations at the International Vienna Centre for logistical reasons.

“De Mistura looks forward to the participation of both delegations in this special meeting. He expects that delegations will be coming to Vienna prepared for substantive engagement with him and his team with a specific focus on the constitutional basket of the agenda towards the full implementation of Security Council resolution 2254, added the statement.

The 8th round of intra-Syrian talks were held in Geneva and wrapped up activities on December 14th, 2017.