Vatican supports a peaceful solution to the crisis in Syria 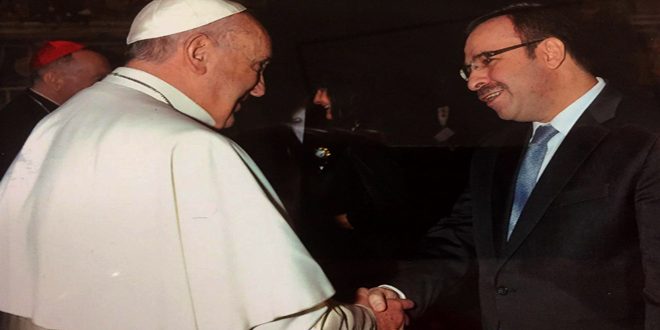 Vatican, SANA-Syria’s ambassador to Vatican Husam Eddin Ala discussed on Tuesday with Vatican’s Foreign Minister Paul Richard Gallagher bilateral relations and the current situation in Syria and the region.

During the meeting, the Ambassador hailed the amity and continuous interest of Pope Francis to Syria in his prayers to prevail peace and stability in the country.

Ala also discussed the latest developments and victories achieved by the Syrian Arab Army in its fight against Daesh terrorist organization (ISIS), stressing determination to liberate the entire Syrian territory from terrorism.

He pointed out to the dangerous outcomes of the U.S policies, the Turkish and Israeli aggressions on Syria, their support of the terrorist groups, and the repercussions of the Israeli attempts to exploit the current situation in the region to strengthen its occupation of the Arab lands.

Gallagher, for his part, asserted the Vatican’s interest in supporting the efforts aiming at finding a peaceful solution to the crisis in Syria and achieving stability in the region.

He added that the Vatican is committed to the UN resolutions on the occupied Arab territories, particularly al-Quds.