OSPAAAL: We trust in the inevitability of Syria’s victory 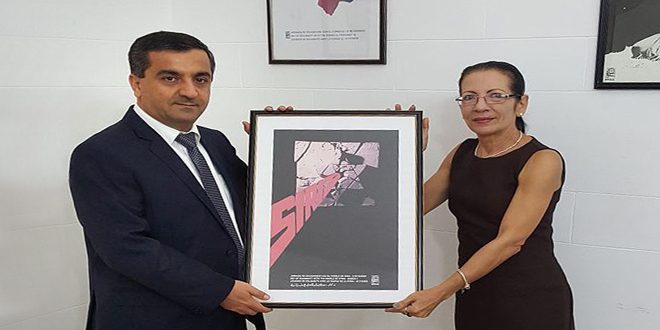 Havana, SANA_ Secretary General of the Organization of Solidarity with the Peoples of Asia, Africa and Latin America “OSPAAAL”, Lourdes Cervantes Vazquez, affirmed confidence in the inevitability of the victory of Syria over the plot hatched against it.

Meeting Syria’s ambassador to Cuba, Idris Mayya, Cervantes Vázquez highlighted the victories of the Syrian Arab Army, saying that OSPAAAL highly appreciates the wise leadership of President Bashar al-Assad and his commitment to sovereignty and the independence of Syria.

She added that the organization will always stand by Syria and work to convey the reality of what is happening in Syria.

For his part, Ambassador Mayya emphasized Syria’s determination to eradicate terrorism and continue reconciliations to facilitate the return of the inhabitants to their towns and villages.

Damascus, SANA- President Bashar al-Assad issued on Tuesday decree No. 209 for 2020 that invites …