Lavrov: Eliminating terrorists in Syria requires coordination between Russia and US, but Washington rejects that 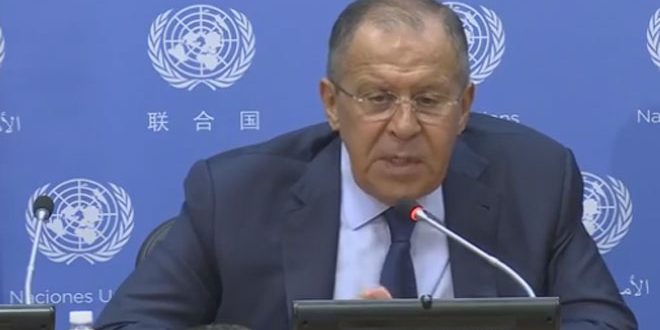 New York, SANA – Russian Foreign Minister Sergey Lavrov said that eliminating terrorists in Syria requires military coordination between Russia and the US, but Washington rejects that, noting that this coordination is blocked by the US Congress that doesn’t care about resolving conflicts.

In a press conference held at New York on Friday on the sideline of the UN General Assembly meetings, Lavrov said that the concept of de-escalation zones in Syria is limited to six months, and that in parallel with this concept there are efforts to encourage national reconciliation in order to launch intra-Syrian dialogue and pave the way towards political dialogue.

The Minister also affirmed the importance of what is being achieved in Geneva and Astana.

Lavrov went on to assert the need to defeat terrorism and preserve Syria’s territorial integrity, affirming that no division can be allowed, as certain sides sought to create decision and sow chaos in the Middle East and North Africa.

He also said that the economic sanctions imposed by the EU on Syria cause much of the humanitarian issues in Syria and hinder providing aid to civilians.