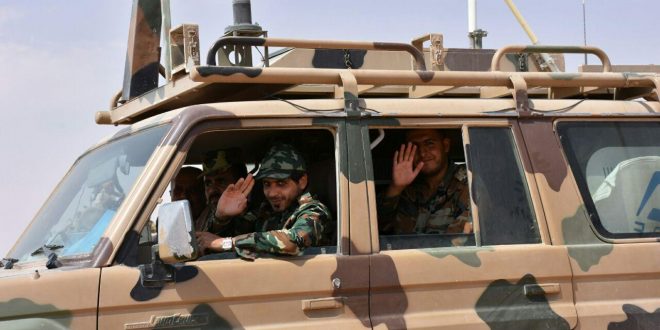 Deir Ezzor/Hama, SANA – The Syrian Arab Army on Tuesday broke the over three-year siege imposed by ISIS on the city of Deir Ezzor after the advancing forces have arrived at Regiment 137.

SANA reporter in Deir Ezzor said that the advancing forces coming from the western front met guards of Regiment 137 on Tuesday afternoon, and thus, broke the siege imposed by ISIS terrorists on the city for more than three years.

The reporter said earlier that Army units carried out new military operations under an intensive air cover to break the siege.

The army units positioned in al-Sanouf Hill opened a 700 m long gab in the areas between the Hill and sites where the terrorists are positioned towards the gas factory at a time when the Army units advanced to an area very close to the Hill.

The reporter added that the Syrian Air Force destroyed a convoy including 10 of ISIS vehicles in the southwestern direction of Deir Ezzor city, in addition to destroying an ammunition depot in al-Bugheiliyeh village in the western countryside of the province.

The reporter added that the Army units engaged in fierce clashes with ISIS terrorists on Regiment 137 and Kabajeb axes in the southwestern countryside of the province, asserting that large numbers of ISIS terrorists escaped, leaving their weapons, ammunition and the bodies of their dead terrorists behind.

While advancing to Regiment 137, the army units destroyed a number of cars rigged with explosives belonging to ISIS terrorists, according to the reporter.

Later, army units operating on the axis of al-Sukhna,Hribsha, Kabajib continued their operations against ISIS terrorist organization and established control over a number of strategic hills in the area surrounding Kabajib town, 50 km to the southwest of Deir Ezzor city.

A field commander told SANA reporter that the military operations towards Kabajib town started from two directions in the north and south of the town where army established control over the mountainous range that overlooks the town from the south, southwest and north sides, thus, the army units tightened the nooseon the terrorist groups positioned in the town.

The commander noted to the importance of establishing control over Kabajib town due to its height from the surrounding areas and the intensity of the fortifications set up by ISIS terrorists as it considered one of the most important hotbeds of ISIS in the countryside of Deir Ezzor.

The commander added that this achievement will enable the army to move towards al-Shula village nearby the city of Deir Ezzor and liberate it in order to open the road to Deir Ezzor city.

Meanwhile, army units seized huge amounts of machineguns, ammunition and rockets inside ISIS dens in the eastern countryside of Salamiyeh in Hama province.

SANA reporter in Hama said that an army unit found ammunition depots belonging to the ISIS terrorists while combing the town of Tuhmaz, adding that the depots included hundreds of thousands of the bullets, tens of the heavy machineguns, computers, shells and satellite equipment.

The reporter indicated that an army unit found 47 rockets belonging to the ISIS terrorists while combing Oqairbat town.

In a relevant context, the source said that an army unit carried out an ambush against an ISIS-affiliated terrorist group that attacked one of the military posts on the road of al-Sa’an-Ethryia in Hama eastern countryside.

3 ISIS terrorists were killed in the ambush and a US-made Tao rocket was seized along with passports and identity cards that were in their possession.