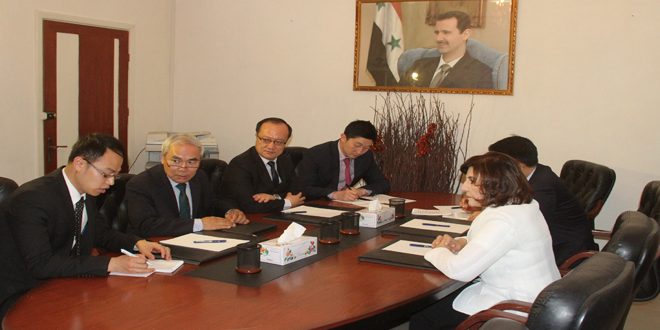 Shaaban stressed the importance of the envoy’s visit to the region in light of the Chinese role on the regional and international levels which benefits Syria and its allies.

For his part, the Chinese envoy said that terrorism is a globalthreat that the international community should cooperate to defeat.

In a statement to journalists after the meeting, Shabban said that Syria encourages China to play its role effectively, particularly in light of the need for greater cooperation with the Syrian Arab Army and its allies in the region, adding that the US and its allies finance and arm ISIS, while the alliance supported by Russia and China stands in the face of this terrorist expansion.

The Advisor said that UN Security Council resolutions provide for holding accountable those who finance, arm, and facilitate the movement of terrorists, yet these resolutions have not been implemented at all, noting that the Syrian Arab Army and its allies reached the Syria-Iraq border when they unified their efforts, stressing the importance of strengthening communication between Syria and Iraq which “dealt a severe blow to the terrorists.”

Shaaban said that there is no justification for targeting army sites directly and placing rocket launchers in the south of Syria by the US, affirming that Washington’s agenda intersects with ISIS agendas which aim at tearing the region apart and depleting its resources, which serves the interests of Israel and the US.

She also lauded China for using the right of veto in the UN Security Council several times for the benefit of the Syrian people to assist them in confronting the war targeting them.

Damascus, SANA- President Bashar al-Assad issued on Tuesday decree No. 209 for 2020 that invites …