Geneva, SANA – The meeting between the delegation of the Syrian Arab Republic headed by Bashar al-Jaafari and the UN Special Envoy to Syria Staffan de Mistura started Tuesday at the UN headquarters in Geneva in the framework of the sixth round of intra-Syrian dialogue.

Earlier, the Syrian delegation arrived at the UN headquarters for holding a session of talks with de Mistura.

In a press conference in Geneva on Monday, de Mistura said that it is fair to say that this meeting will be different from previous meetings, and that all delegations will be present and all parties had agreed on the agenda adopted in the two previous rounds and agreed on four baskets that are all important and will be discussed in a balanced manner.

On May 8, Deputy Prime Minister, Foreign and Expatriates Minister Walid al-Moallem  said in a press conference that the Syrian government has always been present in the Geneva meetings, adding that unfortunately the Geneva track remains at a standstill because there is no patriotic opposition that thinks about Syria instead of receiving instructions from its operators. 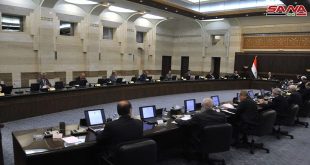