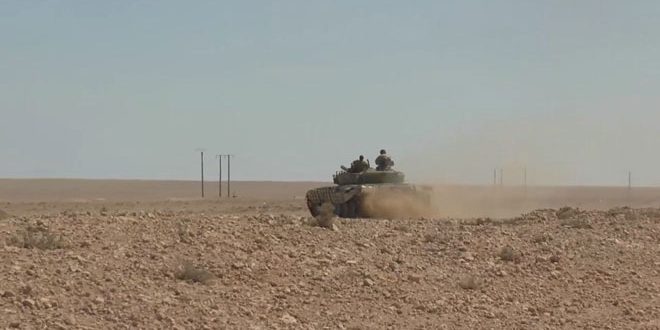 SANA reporter in Deir Ezzor said Sunday that the army units clashed with ISIS terrorist groups as the artillery shelled the ISIS positions and fortifications in the surrounding of al-Maqaber area in Deir Ezzor Province, killing and injuring many terrorists.

The source added that the air force destroyed an ISIS command center, fortified positions and two vehicles in the surrounding of al-Maqaber area and Juneid battalion.

Army units aided by the army air force eliminated more than 19 terrorists affiliated to Jabhat al-Nusra and other terrorist groups linked to it in the countryside of Deir Ezzor and Idleb provinces.

SANA reporter in Hama province said Sunday that the army air force targeted Jabhat al-Nusra and Jaish al-Nasser positions and movement axes in the villages of Ma’r Hurmeh and al-Jaberiyeh in the southern countryside of Idleb province.

The source added that the army airstrikes killed more than 7 terrorists and injured 13 others in addition to destroying a pick-up car.

The army air force destroyed a command center of the so-called Jaish al-Nasser, killing 8 of its members in al-Mostariha village on the southeastern countryside of Idleb.

In the northern countryside of Hama, terrorist Abdel-Qader Abdel-Karim, one of the leaders of the so-called al-Ezza gathering with two other terrorists were killed in the army operations against their command centers in al-Lattameneh town.

Another army unit destroyed a command center for the Saudi-linked Ahrar al-Sham Movement in Kafer Zeitta town, in addition to the killing of two terrorists from Jabhat al-Nusra terrorist organization in the village of al-Humairat, in addition to directing accurate blows to Jaish al-Nasser terrorists in Tal Hawash in the northern countryside of the province.

The army units, in cooperation with the suffering forces, expanded their control in Palmyra area in the eastern countryside of Homs province.

A military source announced that the army units established control over the road linking Wadi Abyad Dam and Palmyra and all points overlooking al-Mahr gas field and marble quarries, 8 km northwest of Palmyra after killing a number of ISIS terrorists and destroying their vehicles.

Taking control of Wadi Abyad Dam-Palmyra road is of a tactical importance as it enables cutting off the supply routes of ISIS from the direction of Raqqa province.

SANA reporter also mentioned that during today’s military operations, the army units established control over the driving school in al-Bayarat area, and continued advancing towards the Triangle of Palmyra area and the heights of al-Hayyal Mountain.

The army air force carried out intensified sorties targeting ISIS gatherings and movement axes in a number of villages and areas in the eastern countryside of Homs province.

Army units operating in Daraa foiled an attack launched by Jabhat al-Nusra on a number of axes and military points in Daraa al-Balad area.

A military source told SANA that army units clashed with terrorist groups affiliated to Jabhat al-Nusra who attempted to attack army’s points in the direction of al-Karak neighborhood, the Old Customs, al-Bado district and the Air Defense abandoned battalion.

The source said that the clash resulting in the killing of a number of terrorists and the destruction of 3 tanks, a machinegun, 3 armored vehicles and hell cannon.

Earlier, the source said that an army unit eliminated most members of Jabhat al-Nusra terrorist group in khazan al-Aileh, southwest of al-Yarmouk Suburb in Daraa al-Balad in Daraa southern province. 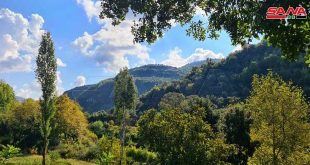