Indian Ambassador: India will try its best to assist in the rebuilding of Syria Damascus, SANA – Ambassador of India in Syria Man Mohan Bhanot said that India is interested in boosting cooperation with Syria during the reconstruction stage, to build upon the centuries-old bilateral relations between the two friendly countries. 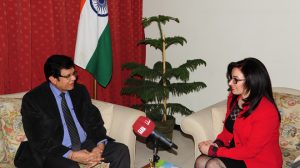 In an interview given to SANA, Ambassador Bhanot said that there are three phases of Syrian-Indian friendship relations, the first dating back to pre-colonial times, Syria and India have always shared friendly relations over generations, and these relations are based on economic reasons, as the Indian manufacturing community always had a good market in the Syrian community, and the reflection of this can be seen in the famous Damascene sword, which was made with steel imported from India, and the spices imported from India.

He said that the second phase of the friendship between the two countries started in February 1952, when Syria and India signed a treaty of friendship and commerce, and this led to the establishment of formal diplomatic relations, and during this period many visits were exchanged, and agreements and MoUs were signed to increase cooperation. Thereafter, India shared its experience in various fields of experience with Syria.

Bhanot went on to say that the third phase started in March 2011, when the crisis in Syria began, and this was a testing time for the friendship between the two countries. India took a judicious and principled stance towards Syria and declared that the crisis shall be solved in a non-violent way and shall be based on inclusive dialogue. 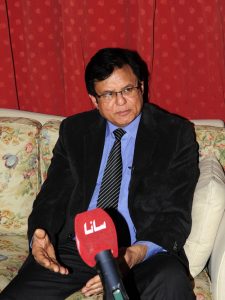 “On this account, India supports all ongoing platforms of peaceful negotiations between the Syrians,” he asserted.

The Ambassador noted that India started formulating modalities to facilitate business between the two countries, so that Indian companies can participate more actively in reconstruction, adding that in the months to come, there will be meetings of the Indian-Syrian Business Council and visits by Indian delegations, adding “India, as a friend of Syria, will also try its best to assist in the rebuilding of Syria.

Bhanot said that several events will be held in Syria to commemorate India’s independence, and the first event will be a reception on February 1st featuring a folk dance troupe from the Indian state of Rajasthan, which will perform later at the Opera House in Damascus and in Lattakia, in addition to screening select Indian movies and a seminar comprising four lectures on Indian-Syrian relations, Indian culture, and Indian achievements in economy.