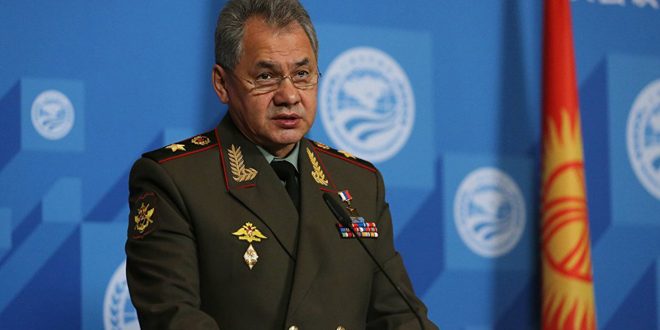 Russian Defense Minister Sergei Shoigu, in a televised meeting with military officials, said strikes had been halted from 10:00 on Tuesday.

On Monday, The Russian Defense Ministry announced a humanitarian pause in Aleppo starting from next Thursday at 08:00 am (05:00 GMT) till 04:00 pm to allow the passage of the civilians and the evacuation of the sick and the injured.

Shoigu called on the countries that have influence over armed groups in eastern Aleppo to convince their leaders to stop military action and abandon the city.

“Everyone really interested in the fastest possible stabilization of the situation in the city of Aleppo should take genuine political steps and not continue shuffling political papers.” Shoigu said.

“Military experts would meet in Geneva on Wednesday to start work on separating “terrorists” from Syria’s moderate opposition,” Shoigu said, adding that Russian specialists had already arrived there.

Meanwhile, Russian Foreign Minister Sergey Lavrov asserted the necessity of working on separating Jabhat al-Nusra terrorist organization from the “armed factions” supported by the US and regional states in conjunction with the halting of Russian and Syrian airstrikes on Aleppo.

In a press statement with his Paraguayan counterpart in Moscow, Lavrov said the Syrian and Russian sorties in Aleppo stopped today as a gesture of goodwill, adding that this pause in bombing must be used by Russia’s partners to separate Jabhat al-Nusra and its affiliates from the factions that are funded, supported and armed by the United States and some European and regional countries.

He noted that this separation was promised since February 2016, but nothing has been done so far.

Lavrov pointed out that according to the outcomes of Lausanne meeting on Syria last Saturday, military experts would meet in Geneva on Wednesday to work on separating al-Nusra terrorist organization from the so-called “moderate opposition” in Aleppo.

halting of air strikes on Aleppo humanitarian pause Russia's defense ministry Sergey Lavrov 2016-10-18
hala
Share
Previous Syrian Embassy in Moscow: Minister al-Moallem is to visit Russia by the end of the current month
Next Four killed, including two women, in terrorist attacks in Aleppo and Quneitra