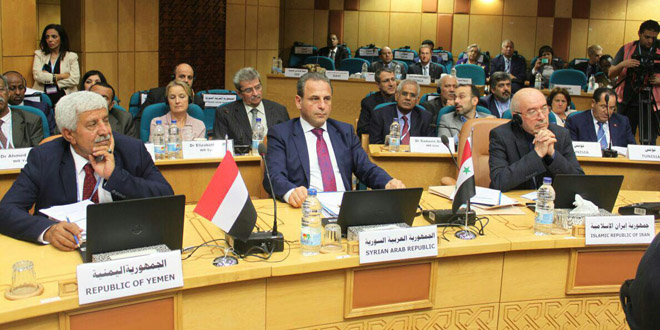 Cairo, SANA – Health Minister Nizar Yazigi discussed on Tuesday with Director-General of World Health Organization (WHO) Margaret Chan the efforts to provide health services to all citizens, mainly those who are affected by the war waged on Syria.

During the meeting, which was held on the sidelines of the 63rd session of the WHO Regional Committee for the Eastern Mediterranean held in Cairo, Yazigi briefed Chan on the damage inflicted upon the health sector due to the continued targeting of health institutions and their staff by terrorists.

In the same context, the Minister discussed with WHO Regional Director for the Eastern Mediterranean Ala Din Alwan means to enhance cooperation between the two sides and drafting a vision related to the joint programs in a way that meets the increasing health needs, particularly for people with chronic diseases.

Yazigi also discussed with his Omani and Sudanese counterparts the regional efforts to maintain public health and disease control.