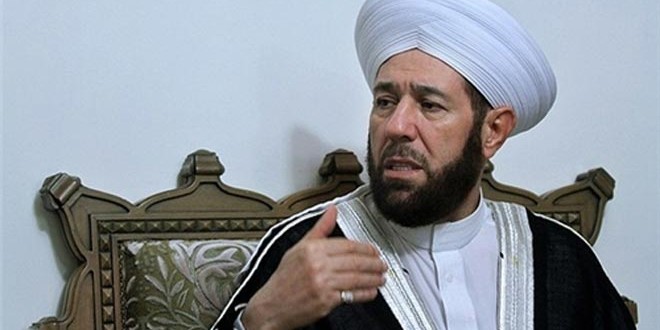 Damascus, SANA-Syria’s Grand Mufti, Ahmad Badr Al-Din Hassoun, called on those who carried weapon in Aleppo’s eastern neighborhoods and countryside to return to the lap of homeland and make use of amnesty decrees and share the reconstruction process.

Hassoun, in a phone call with the Syrian TV aired on Wednesday, appealed to families of Aleppo to cooperate with the Syrian Army and get the foreigners out of the eastern city to restore security and stability to Aleppo.

He affirmed that President Bashar al-Assad had announced that the amnesty door is open to those who want to return to the Homeland and correct their mistakes, express their opinions and practice their normal life.

Mufti Hassoun calls on those who carried weapon to make use of amnesty decrees 2016-07-27
m.eyon
Share
Previous Foreign Ministry: Terrorist attacks on residential neighborhoods in Damascus and Qamishli an attempt to undermine efforts of sparing blood of Syrians
Next Information Minister inspects work mechanism at SANA