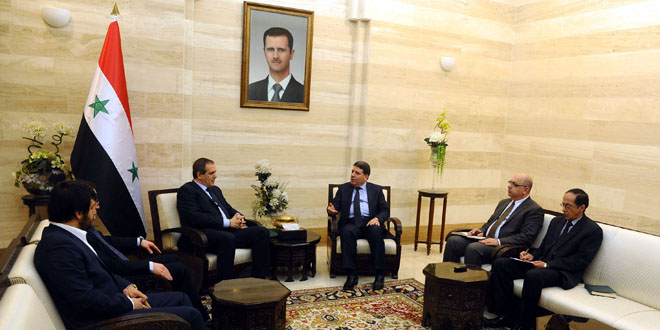 Damascus, SANA – Prime Minister Wael al-Halaqi on Sunday met member of the Federation Council of Russia Ziyad Sabsabi and received from him a letter from Chechen President Ramzan Kadyrov to President Bashar al-Assad.

During the meeting, al-Halaqi said that Russia today needs the efforts of all its children, both living in Syria and those living abroad, to heal its wounds and restore its luster, adding that Syrian expatriates have proved their worth and their ability to contribute to building the communities they live in abroad.

He also lauded the efforts of Sabsabi who occupied important positions in Russia and the role of the Syrian community in Russia in boosting bilateral cooperation, calling on the Syrian-Russian Business Council to launch development projects and participate in the reconstruction stage in Syria.

For his part, Sabsabi expressed pride in his homeland Syria, voicing confidence that it will be victorious over terrorism. In the same context, Sabsabi met Assistant Regional Secretary of al-Baath Arab Socialist Party Hilal al-Hilal, who said that the historical Syrian-Russian relations are based on respect, mutual interests, and coordination, lauding Russia’s position towards Syria and its efforts in the war against terrorism.

During this meeting, Sabsabi said that the war imposed on Syria seeks to destroy and fragment it, and that some of those who claim to be opposition have no political programs or visions for a solution; rather they are pawns of Turkey, Saudi Arabia, and other sides.