Al-Halaqi: The government is working to eliminate administrative corruption 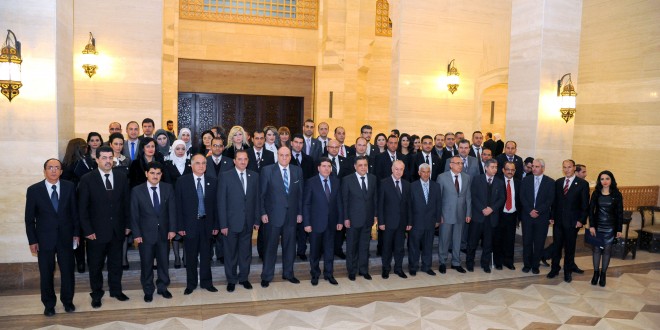 Damascus, SANA- Prime Minister Dr. Wael al-Halaqi said on Sunday that the government is working to address the deficiency in the governmental work system, eliminating administrative corruption, rationalizing spending and activating the performance of the sectors.

Attending the graduation of 39 students from the National Institute of Public Administration, al-Halaqi stressed the need for the performance of the administration and the civil service at government establishments to reflect the objectives of the sustainable development with high efficiency and a sense of national responsibility and commitment to work according to President Bashar al-Assad’s continued guidance to the government.

A-Halaqi called on the graduates to bear responsibility in carrying out their experiences, knowledge and science on the ground for the advancement of government establishments, pointing out that the successful administrative leader is the one who has knowledge, experience, integrity, credibility and transparency and who stands beside employees and who is keen to ensure the success of the establishment.

Al-Halaqi added that the government observes the performance of the government regulatory bodies, especially the central body for control and inspection, the State Council and the judiciary council to reform work of these establishments and improve their performance since there is some kind of corruption, noting that firm measures and decisions were taken.

The National Institute of Public Administration was established in 2002.

Its graduates who numbered 535 work in ministries and public establishments after being trained and qualified in the field of economy, public finance, law, public utilities and management of international cooperation, regional planning and social relationships.