The army establishes control over areas in Aleppo and Lattakia 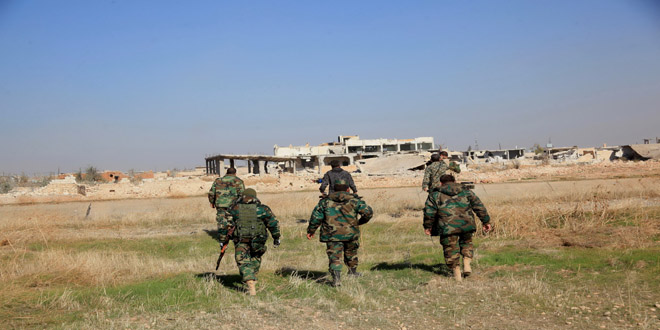 Provinces, SANA – The Syrian Army and Armed Forces continued carrying out counter-terrorism operaitons in several provinces across the country, establishing control over areas in Aleppo and Lattakia.

The army established control over Khan Touman town and Qarassi village in the southern countryside of Aleppo province, a military source announced on Sunday.

“During the past few hours, army units carried out special and swift operations, establishing full control over Qarassi village and the surrounding warehouses,” the source told SANA.

Later on the day, the source added, the army units and supporting forces established control over Khan Touman town and the surrounding farms, with the area considered one of the largest gatherings of Jabhat al-Nusra terrorists.

The terrorists in the abovementioned areas suffered heavy losses in personnel and equipment and the army units dismantled the explosive devices and mines planted there.

On December 12, the villages of Mreiqis, Abo Rueil, Qreihiyeh, al-Sueibiyeh and Dallameh to the south of al-Arbaeen Hill in Aleppo southern countryside came under the army’s control.

In the same context, an army unit targeted terrorists’ positions in al-Zirbeh town, 20 km to the southwest of Aleppo city.

In Aleppo city, the army destroyed hideouts for Jabhat al-Nusra terrorists in the neighborhoods of Bani Zaid, al-Ramousa, al-Lairamoun and Karm al-Trab.

In the eastern countryside of Aleppo, army units hit sites and movements of ISIS terrorists in al-Shawaia Hill and in Bijan and Rasm al-Sahrij villages.

A number of vehicles, some equipped with machine guns, were destroyed in the army operations, while many terrorists were killed.

An Army and Armed Forces unit destroyed a vehicle, leaving the terrorists on board dead or injured, in an operation which targeted terrorists’ movements east of the National Hospital in Daraa city.

A military source told SANA that another army unit carried out an operation targeting terrorists’ positions south of al-Manshiye neighborhood in Daraa al-Balad area in the city, killing and injuring a number of terrorists.

Units of the Army and Armed Forces, in cooperation with popular defense groups, established control over al-Kabeer village and the three strategic points 453.5, 535.5, and 539.5 in the area between al-Kouz and al-Aswad al-Kabir mountains in the northern countryside of Lattakia province.

A military source said that this took place following violent clashes with terrorists, scores of which were killed in the process, adding that the army’s engineering units combed the village and the areas and dismantled dozens of explosive devices that terrorists had planted.

An Army and Armed Forces unit destroyed hideouts and concentrations of ISIS terrorists west of al-Tarr mountain and in al-Zakara valley in Palmyra’s western countryside in Homs province, a military source told SANA.

The source added that the operations left a number of terrorists dead and others injured, in addition to destroying a number of their vehicles and heavy machineguns.

Another army unit repelled an attack by ISIS terrorists who were moving from the direction of Unq al-Hawa village towards Jub al-Jarrah and froun Rahmoum and Oum Sehreej towards Maksar al-Husan east of Homs city, with the clashes leaving a number of terrorists dead, others injured, and destroying their weapons and munitions.

The army also destroyed bases and hotbeds of Jabhat al-Nusra and other terrorist groups in the villages of Oum Sharshouh and al-Mashjar al-Janoubi north of Homs city.

The army kills 60 terrorists in the countryside of Idleb and Hama Sunday
An Army unit directed concentrated strikes at a hideout for terrorists from “Jund al-Aqsa” terrorist organization in Atshan village in the far northern countryside of Hama province, field sources told SANA.
The sources said the operation led to destroying the hideout completely and killing terrorists Mukhtar al-Rajo, Zafer al-Ashqar, and Ammar al-Abdo.

Tow terrorist were killed and three others were injured and their vehicle was destroyed in army operation on one of the hideouts of the so called “Jaish al-Fateh” terrorist group in Tal al-Sayad in the northern countryside of Hama province.

In another special army operation, 10 terrorists were killed and their depot was destroyed in Kafr Nabouda town, 50 km to the northwest of Hama city.

In Idleb province, at least two terrorists were killed when an IED went off inside a vehicle transporting a terrorist group in Jisr al-Shughour south of Idleb city.
The two dead terrorists were identified as Ezeddin al-Shaghel and Mohammad al-Qashash from “Ahrar al-Cham Movement” terrorist organization.