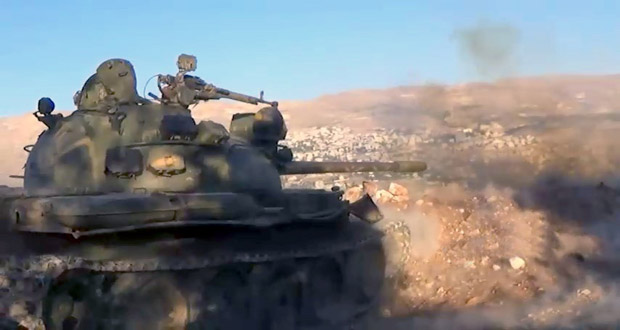 Provinces, SANA – The army inflicted more losses upon the terrorist organizations in the course of military operations its units carried out on Thursday, killing over 120 terrorists in Aleppo alone and shooting down a drone for them there.

Units of the army established full control on all hills that overlook eastern al-Ghouta in Damascus countryside after eliminating terrorists of Jaish al-Islam, destroying their weapons and ammunition.

A military source told SANA that the army pursuits remnants of the terrorists who fled into Harasta highway.

More than 120 terrorists, mostly from Jabhat al-Nusra and ISIS, were killed and a drone belonging to them was shot down during army operations in Aleppo province.

Some ISIS terrorists were killed at the hands of the army units defending the Air Force Academy, located on the international highway leading to the northeastern Raqqa province, a military source told SANA on Thursday.

More terrorists were killed as an army unit targeted them and their vehicles in the vicinity of al-Nairab Airport, 10 km east of Aleppo city.

Terrorists from Jabhat al-Nusra had their hideouts in al-Naseriyeh village and Hreitan town in northern Aleppo targeted. Many of those were killed and their vehicles were destroyed.

Meanwhile, an army unit shot down a drone belonging to terrorists over Bashkoui village in Aleppo northern countryside, which is considered the terrorists’ major supply route across Turkey.

Army units also killed Jabhat al-Nusra terrorists and destroyed a number of their vehicles in Khan al-Assal town in the southwestern countryside.

The army destroyed a vehicle, equipped with a heavy machinegun, for Jabhat al-Nusra terrorists and killed many of them in the surrounding of al-Ghagar, Ezz Eddin and Salim villages and in al-Rastan town in Homs northern countryside.

Another army unit, in cooperation with popular defense groups, foiled an infiltration attempt by two terrorist groups into a number of military points in Ayn al-Dananer village and al-Tali region, killing a number of them.

The army also inflicted heavy losses upon terrorists of ISIS in al-Sikhnah, Tadmur and in the surroundings of al-Sha’er oil field, destroying a number of vehicles and killing a number of terrorists.

Lattakia
Army air force destroyed a number of terrorists’ hideouts and concentrations in Kanasba and Salma in Lattakia’s northern countryside.

The army’s air strikes ended up with the killing of large numbers of terrorists from “Jabhat al-Nusra” and destroying their weapons and dens.

The army’s air strikes ended up with the killing of large numbers of terrorists from “Jaish al-Fatah” and destroying their weapons and dens.

Three terrorists’ vehicles, one equipped with a machine gun and another carrying ammunition, were destroyed in an army operation on al-Hamediyeh/al-Hurriyeh road in the southern Quneitra province.

Field sources told SANA the operation was carried out in cooperation between an army unit and the popular defense groups in Khan Arnaba, adding that all the terrorists on board the vehicles were killed.

Two other vehicles transporting terrorists and ammunition were destroyed as an army unit targeted a gathering of terrorists to the east of Trinjeh village.

An army unit killed a number of terrorists, including a leader, and destroyed their vehicles, one of which equipped with a heavy machine gun, in Daraa al-Balad neighborhood in Daraa city.

Army units targeted ISIS hideouts and gatherings in Kherba and Tal Saad in Sweida’s north-eastern countryside, killing scores of terrorists and destroying their vehicles and weaponry.