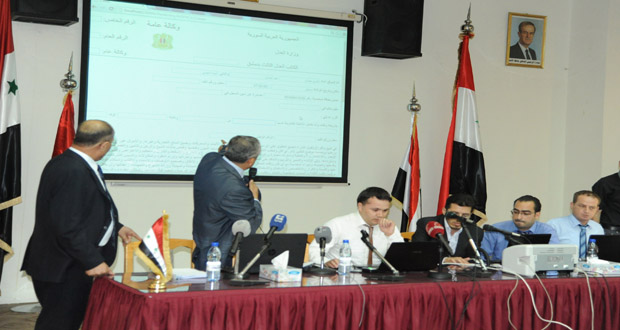 Damascus, (SANA) Prime Minister Dr. Wael al-Halqi said the power of attorney documents management, issuance and archiving system, a project that the Justice Ministry is currently working on, is part of the government’s efforts within the framework of the e-government project.
Speaking to journalists after a presentation about the project at the Justice Ministry building, al-Halqi said the project is also part of the ministry’s efforts for overhauling and automating judicial work.

The project is a significant step forward in the documentation and archiving of the power of attorney documents amid the current crisis and myriad attacks by terrorists against justice palaces, banks and the transport directorates.

The successes racked up by the Syrian army on the ground help stabilize and advance the government’s work at all levels, the PM pointed out.

Minister of Justice, Dr. Najm al-Ahmad echoed in a similar statement that the project is a step towards e-government, in a way that keeps pace with global developments, affirming that the ministry will have done away with paperwork by 2015.

The project is aimed for building a national bank for electronic archiving that allows the archiving of all power of attorney documents by the notaries in Syria before automating, issuing and fully achieving them as a second stage.