Al-Zoubi to Arab teachers: Syria will always be for all Arabs 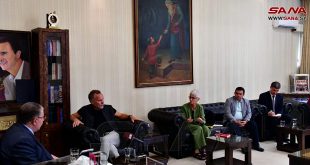 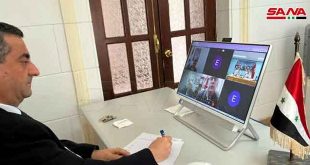 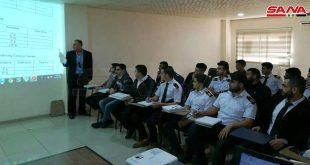 Damascus, SANA-Information Minister Omran al-Zoubi said true belief in Arab nationalism remains unshaken “in times of ordeal, not only in prosperity,” indicating that Syria will always be for all Arabs.

Al-Zoubi, who was addressing a delegation of Arab teachers currently visiting Syria, underlined the role of teachers in building generations capable of rising to the ordeal that has afflicted the Arab nation.

Commenting on the Saudi-led military campaign against Yemen, a l-Zoubi pointed to an Israeli-Saudi collaboration against Arab states.

He considered that “Saudi Arabia needed an excuse to cover its repeated failures, that’s why it mounted an attack against Yemen which it thought is a soft belly.”

“Saudi Arabia will be doomed politically at the hands of the Yemeni people,” he anticipated.

Faraj Abdullah Murtada, Secretary-General of the Arab Teachers Union, said all the Arabs believe that Syria will soon overcome the crisis.

The delegation members said the visit is aimed to show support for and solidarity with Syria against the hostile campaign targeting it, hailing the epic steadfastness of the Syrian people against terrorists.

The delegation also met Assistant Regional Secretary of al-Baath Arab Socialist Party Hilal al-Hilal, who asserted that Damascus will always remain open to honest Arabs, and that what is happening in the region currently requires teachers to work to create education and awareness programs that create a sense of Arab nationalist awareness to confront the plots targeting the region.

He lauded the Union’s insistence on holding its conference in Damascus, asserting that all sorts of support will be provided to ensure its success, and affirming that the education sector is a priority for the Syrian leadership.

In the same context, the delegation met Education Minister Hazwan al-Waz, who briefed them on the damage caused to the education sector due to terrorist attacks, saying that more than 5,000 schools have been put out of commission, with losses estimated at SYP 170 billion, while victims of terrorist attacks number around 1,000 students, teachers, and administrative staff, with half of the victims being children.

Al-Waz said that efforts have been made to develop curricula and ensure the availability of teachers, even in hotspots, in order to alleviate the impact of the crisis on the educational sector.