Crowned athletes at “Wounded of the Homeland” games: Coronation is an incentive to achieve medals in world tournaments 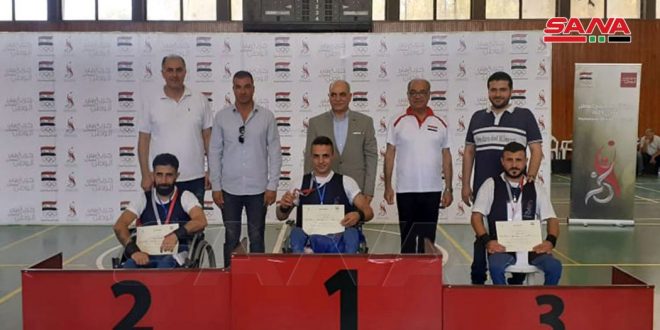 Lattakia, SANA- Participants in the first round of “Wounded of the Homeland” Games which is currently held at al-Assad Sports City in Lattakia, affirmed that practicing sports is useful to improve the psychological and health status and a new start to return to normal life and enter the world of sports competitions to raise the flag of Syria.

In a statement to SANA, the wounded Najm al-Din Hassoun, who won the gold medal in the 80-kg physical strength championship, said that obtaining the gold medal is an incentive for him to continue serious training and prepare well in order to achieve medals in the world tournaments to raise the Syrian flag at sports forums, as he did on the battlefields, pointing out that this tournament is a real opportunity for competition and gaining experience.

Meanwhile, Majed Nahal ,who gained the gold medal in 54 kg weight, described the competition as a qualitative, distinct and very useful initiative for all participants psychologically and physically adding that gaining gold medal for the first time will be an incentive for him to participate in the upcoming tournaments within the ranks of the national team to raise the flag of Syria , as he raised it on the battle fronts .

Wounded Hassan al-Azraa, who won the gold medal in the 65 kg weight by physical strength, called on his injured comrades to participate in the upcoming tournaments because it is a good opportunity to enter the field of competition and return strongly to normal life.

In turn, Wassim Khaddour, Khalil Mahmoud and Abd al-Rahman Hamroush, winners of the javelin throwing competition from a sitting position, stressed that the participation is good and constructive and the competition is strong, in addition it created a wonderful social and sports atmosphere among the participants who overcame their wounds with the will to challenge to continue life in the field of sports and achieve championships.