Hama, SANA- A civilian was martyred, and another was injured in an attack by Daesh (ISIS) terrorist organization on surroundings of Bayoud town in al-Hamara town in Hama eastern countryside.

A source at Hama Police Command told SANA reporter that Daesh terrorists targeted with machineguns citizens while they were grazing sheep in Bayoud town surroundings in al-Hamara town in Hama eastern countryside, causing the martyrdom of a civilian, the injury of other one, and the death of a number of sheep. 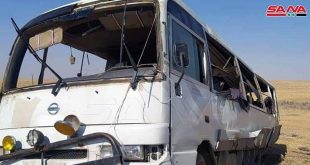 A number of citizens martyred and wounded in blast of landmine, of terrorist remnants in Hama countryside

Hama, SANA –Several members of the supporting forces were martyred and injured in an explosion …