Lavrov meeting Pederson: the political solution to the crisis in Syria is proceeding steadily

Moscow, SANA- Russian Foreign Minister Sergey Lavrov affirmed that the process of the political solution to the crisis in Syria is proceeding steadily despite the objective difficulties, and in the first place the Coronavirus pandemic.

Lavrov said during his meeting in Moscow on Thursday with UN Special Envoy for Syria Geir Pedersen that the situation is featured by a remarkable stability in the largest parts of Syrian territory although the fight against terrorism continues to be urgent, with hotbeds of terrorism still present in Syrian territory.

Lavrov indicated that the humanitarian aid for civilians and providing conditions for the return of refugees to which the Damascus International Conference was devoted in this regard is present in the first place, adding that we see additional needs to activate the political solution efforts and the steps taken by the UN envoy to accelerate the resumption of the work of the committee of discussing the constitution.

Lavrov recalled that the committee of discussing the constitution  was formed at the initiative of the Troika Asatana, which continues its work and accompanies the process of the political solution in all aspects affirmed by Security Council Resolution No. 2254, which provides for the unconditional respect by all members of the international community for the sovereignty , territorial integrity and independence of Syria, pointing out that the stances of the two sides are very close with regard to the implementation of the resolution No. 2254.

Lavrov stressed that the continued illegitimate presence of foreign forces inside the Syrian territory that does not meet those criteria constitutes one of the aspects of the problem that must be resolved. 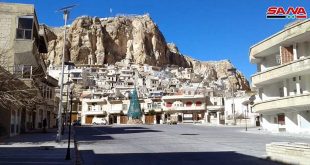 Damascus countryside, SANA- Several projects have been initiated by the Municipal Council in Maaloula town, …