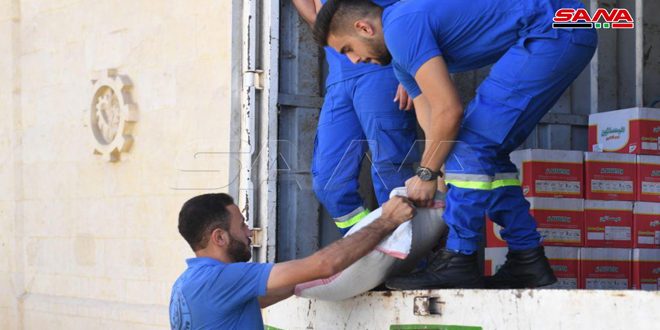 Aleppo, SANA- Aleppo Province ,in coordination with the Directorate of the Social Affairs and Labor along with Aleppo People’s Initiative, sent a convoy of relief assistance to the people affected by fires in the two provinces of Lattakia and Tartous .The aid contains food products, blankets, clothes and medical supplies . Assistant Director of social affairs in Aleppo said in a statement to SANA that the work is underway to move the relief assistance frequently ,since Saturday evening, to the people affected by fires in Tartous and Lattakia ,as truckers loading medical items ,clothes and food products will be shipped to the affected people who lost their houses or were enforced to leave them.

For his part Tarif Attorah ,the Head of the Aleppo People’s Initiative said that within the campaign launched by the Ministry of the Social Affairs and Labor to help the people affected by fires in Lattakia and Tartous city ,the initiative participated through sending truckers loaded with food ,relief and medical supplies in cooperation with a number of NGOs aimed at helping the locals of the affected areas .

2020-10-11
Baraa
Share
Previous Khan al-Saboun in Aleppo inaugurated after rehabilitation, making largest piece of soap in the world
Next Jordanian delegation : We are confident of Syria’s triumph over terrorist war