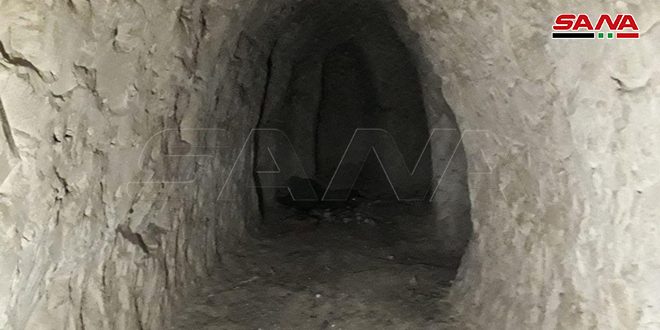 Hama, SANA – Syrian Arab Army units continued canvassing the areas in Hama’s northern countryside that have been liberated from terrorism, reopening and securing roads, dismantling landmines and IEDs, and uncovering a tunnel network dug by terrorists.

SANA’s reporter said that army units uncovered caves and a complex network of tunnels that terrorists had dug in the mountains in al-Enz valley, which contained command centers, Western-made supplies and equipment, and Saudi Takfiri pamphlets.

The reporter said the tunnels are large enough to allow vehicles to enter and exit them as well as allowing for hiding heavy vehicles, and they contained fuel and weapons depot which terrorists had emptied out and transported prior to their defeat.