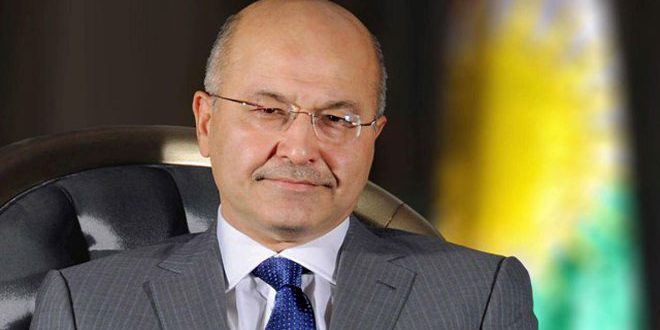 SANA reporter: 2 women and a child martyred, 3 others injured in terrorist rocket attack on New Aleppo and al-Zahraa neighborhoods in Aleppo city

Baghdad, SANA-Iraqi President Bahram Salih reiterated the call for finding a political solution to the crisis in Syria.

Al-Sumaria News website quoted the Iraqi Presidency as saying in a statement on Sunday that President Salih, upon receiving US Special Envoy for Syria James Jeffrey in Baghdad, “underlined the importance of finding a political settlement to the situations in Syria and ending the suffering of the brotherly people of Syria and helping them to face terrorism.”

President Salih also “affirmed the necessity of depending on positive dialogue among all parties to solve the problematic issues and the crises in a way that would help consolidating the bases of the international peace.”

He added that Iraq “seeks to adopt a balanced policy that aims at achieving the convergence of viewpoints among the regional states in order to alleviate the current tension.”

On the other hand, Iraqi Defense Minister Najah al-Shammari, during a  meeting with Jeffry, affirmed that Iraq will not allow using its territories against the neighboring states and the region and that it is keen on preserving its security and stability.