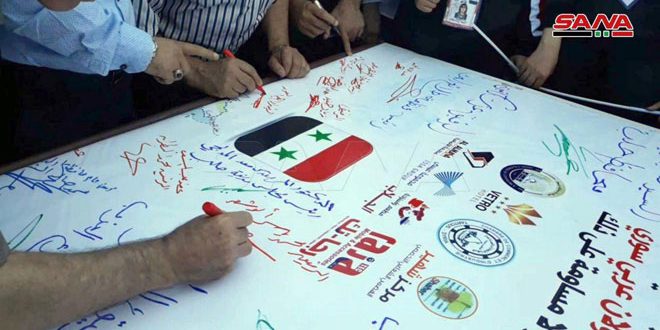 Aleppo, SANA- Official, youth and popular figures on Sunday participated in a national activity under the title “Come On Together” to sign the longest letter of love and loyalty to the occupied Syrian Golan and its steadfast people and to affirm its Syrian Arab identity.

Participants in the event affirmed that the Golan is a Syrian Arab land, voicing support to its steadfast people in the face of the Zionist enemy and its repressive and hostile practices which contradict with the resolutions of the international legitimacy.

Supervisor of the campaign, traveler Ehssan Nassir told SANA that the activity started from Sweida province with the participation of 14 women on bikes on the occasion of hoisting the national flag in the sky of Quneitra province after its liberation.

The letter was written on a roll of paper that includes the signatures of 3 million Syrian people as it has toured the provinces of Daraa, Quneitra, and Hama and on Sunday it reached Aleppo province.