Lavrov and Pedersen: Need for reaching a political solution to crisis in Syria on the basis of UN resolution no.2254. 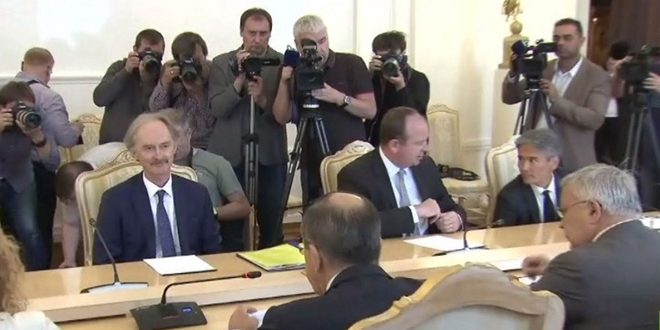 Moscow, SANA- Russian Foreign Minister Sergey Lavrov affirmed need for eliminating terrorism in Syria and reaching a political solution to crisis in it in accordance with UN Resolution no.2254.

Lavrov’s remarks came during a meeting with UN Special Envoy to Syria Geir Pedersen on Friday.

Lavrov said that “We estimate dialogue with the United Nations as it is based on trust and the effective cooperation which is made within the framework of Astana as well as the efforts that are growing on the basis of the outcomes of the Intra-Syrian National Dialogue Conference in Sochi,” referring to the desire for reaching the aspired results in eliminating terrorism in Syria and finding a political solution to the crisis in accordance with UN Resolution 2254 .

For his part, Pedersen pointed out to the necessity of joint work between Russia and UN for finding a political solution to crisis in Syria based on UN Resolution no. 2254 , indicating that he will visit Syria next week.