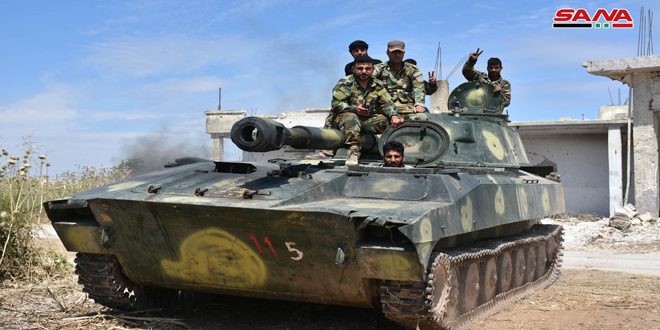 Hama, SANA- Units of the Syrian Arab Army destroyed vehicles and dens of Jabhat al-Nusra terrorists in Kafr Sajna town and al-Bara village in Idle southern countryside in retaliation to their continued breaches of the de-escalation zone agreement.

The reporter added that dens and vehicles of terrorists were destroyed in the strikes, in addition to killing a number of them and injuring others.

On Tuesday, army units killed scores of terrorist groups’ members and injured others in the surroundings of the towns of Mourek, al-Zakat and al-Arbain in Hama northern countryside.

2019-05-29
ruaa-jazaeri
Share
Previous A woman martyred, seven civilians injured in a terrorist shelling attack in Hama countryside
Next Damascus, Moscow call upon international community to exert pressure on Washington to pull out its troops from Syria