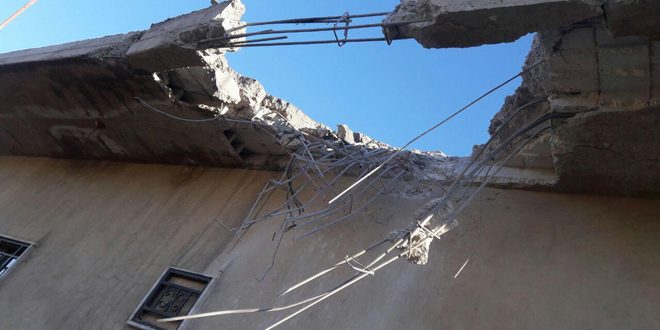 Hama, SANA- A woman was martyred and seven civilians were injured, in addition to causing destruction in a terrorist rocket attack on the town of Qamhana and the cities of Salhab and al-Suqailbyia in Hama northern countryside.

SANA reporter in Hama said that terrorists positioned in Hama northern countryside targeted Qamhana town with a number of rockets claiming the life of a woman and injuring five civilians, in addition to causing material damage to houses and properties of the locals.

The reporter added that a number of rocket shells fired by terrorist groups fell on the cities of al-Suqailbyia and Salhab in Hama northern countryside, causing the injury of a man and a woman in Salhab and a huge destruction of the locals’ properties and the agricultural lands in the two cities.

Later, the reporter said that the terrorist groups fired several rocket shells on Shataha town in Hama northern countryside , causing fires to break out in farmlands.

On Tuesday, terrorist groups fired a number of rocket shells at Salhab City and Qamhana town to the north of Hama city causing material damage to the houses and properties and fires in the nearby farms and bushes.