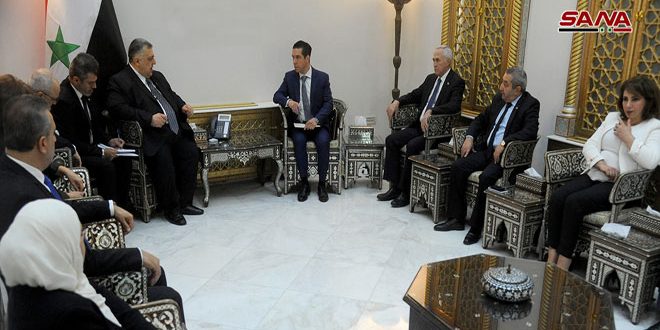 Damascus, SANA – Speaker of the People’s Assembly Hammoudeh Sabbagh stressed the importance of enhancing parliamentary cooperation between the Syrian People’s Assembly and the Parliament and Senate councils in Brazil.

He pointed out to the deep relations between the two countries and the positive role of Brazil in supporting Syria in international forums.

for his part, Vaz Pitaluga expressed his country’s support for reaching a political solution to the crisis in Syria through dialogue between the Syrians themselves away from any foreign interference for restoring stability and security to the country.

He expressed confidence that the Syrian people are able to overcome obstacles and launch the reconstruction stage, pointing out to the key role of the Syrian community in Brazil in upgrading cooperation in different spheres.