Civilians martyred, others injured by explosive rounds, shells, and IED in Damascus and Aleppo 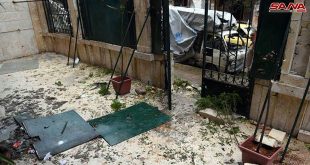 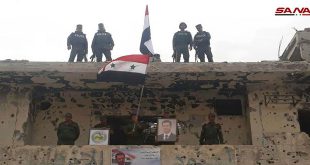 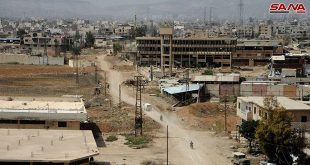 A source at Damascus Police Command said that a number of explosive rounds were fired on al-Zahera al-Qadima neighborhood by terrorists positioned in the northern part of al-Hajar al-Aswad neighborhood, injuring three civilians.

Later on Friday afternoon, a number of people were martyred and others were wounded when a shell landed in al-Tadamon neighborhood as a result of the clashes with terrorists in the nearby area of al-Hajar al-Aswad, which is adjacent to al-Tadamon south of Damascus.

SANA’s correspondent reported that a shell landed at al-Jala’a Street in al-Tadamun as violent clashes erupted between the Syrian Arab Army and the terrorists positioned in the al-Hajar al-Aswad and neighboring areas.

Selectman of al-Tadamon area, Ahmad Iskandar, told SANA that the residential buildings in the neighborhood are right next to Yarmouk Camp where terrorists are positioned, with no more than 150 meters separating them.

He said that daily attacks by terrorists claimed the lives of civilians, injured dozens, and caused material damage in the houses, yet locals insist on staying in their homes.

Meanwhile in Aleppo city, 2 civilians were martyred and 9 others were injured as a result of the explosion of an IED left behind by terrorists in al-Maadi neighborhood.

A source at Aleppo Police Command told SANA’s correspondent that the IED had been planted by terrorists in a house prior to their defeat, and it went off on Friday, martyring two civilians and injuring three others.

Later in the day, 6 people were injured and material damage was caused by 5 shells that were fired on al-Khalidiye neighborhood in Aleppo city by terrorists located in Jami’et al-Zahra’a area.