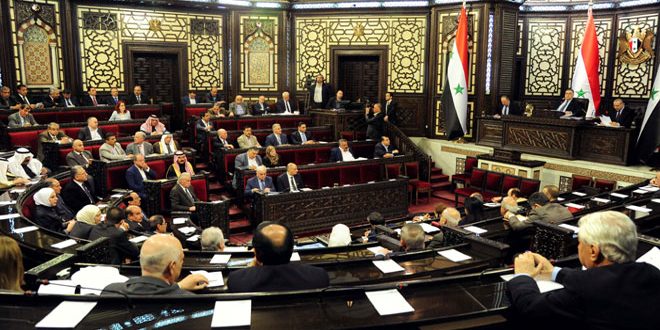 Damascus, SANA-Performance of Information Ministry and issues related to it were highlighted on Thursday during a People’s Assembly session, chaired by Speaker Hammoudeh Sabbagh.

At the beginning of the session, Information Minister Imad Sara reviewed the Ministry’s vision and media strategy, saying that the Ministry is focusing on enhancing national media to be the main source of news in Syria which materialized during the media coverage of the military battles in Eastern Ghouta, where the Syrian media for the first time turned to be the real and the only news source which provided news for all channels and international agencies.

The MPs, in their inquiries and comments, called for establishing an integrated media city and creating investment opportunities related to media sector.

The Ministry is preparing a plan to support journalists, raise wages and provide elements to attract citizens to follow the national media, Sara said in a response to the inquiries, adding that the Ministry is paying great attention to reconstruction stage and fighting corruption.