Lavrov: If the US attacks Syria, the consequences will be serious 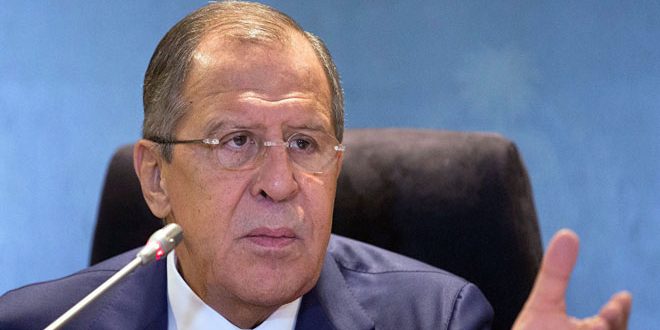 Moscow, SANA – Russian Foreign Minister Sergey Lavrov warned the United States against attacking Syria, saying that if this happens, the consequences will be serious.

In a press conference in Moscow on Tuesday, Lavrov said that the US representative at the Security Council Nikki Haley should be aware that “It is one thing to irresponsibly use a microphone in the UN Security Council and another thing when [both Russian and American] military have channels of communication, and these channels show very clearly what could be done and what cannot be done,” adding that the US coalition knows this very well.

Lavrov pointed out that terrorists in Eastern Ghouta continue to fire shells at Damascus, including the Russian Embassy, in blatant violation of Security Council resolution no. 2401, stressing that the terrorists, led by Jabhat al-Nusra, want only to stop the Syrian Arab Army operations so that they can catch their breath.

He noted that the Western side which made a commitment to influence terrorist organizations hasn’t prevented them from shelling residential areas in Damascus.

The Minister said that the new draft resolution on Ghouta which Washington intends to submit to the Security Council shows that it failed in implementing the previous resolution and that it doesn’t want to fight terrorism, as the new resolution doesn’t exclude terrorists from operations, and in other words it prevents anyone from touching them.

Lavrov said that Russia believes the US coalition isn’t very interested in eliminating the remnants of terrorism; rather it wants to preserve terrorists to use them against the Syrian government, as the Eastern Ghouta is the optimal location to harm the capital Damascus and thereby set the stage for Washington’s plan of dividing Syria.

He noted that in 2017, the Syrian government agreed to have UN experts visit Shayrat airbase to investigate the claims of using sarin gas in the Khan Sheikhoun incident, and the US side of this but it said that they don’t need the experts anymore, and went ahead and attacked the airbase.

Lavrov stressed that if another strike like the one on Shayrat airbase takes place, the consequences will be serious.

On the upcoming meeting of the guarantor states of the Astana process, Lavrov said that the de-escalation zones will be discussed at the meeting, as well as means to preventing terrorists from violating the cessation of combat activities in Eastern Ghouta, where there are terrorists form several organization, mainly Jabhat al-Nusra or “Hai’et Tahrir al-Cham” which changed its name without chaning its nature, and is listed as a terror organization by the Security Council.