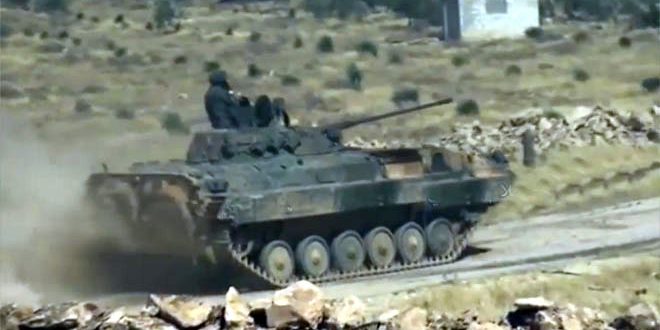 Hama/Homs, SANA – Syrian Arab Army units, in cooperation with the popular defense groups, carried out intensive bombardment against Jabhat al-Nusra terrorists’ movements towards military points in al-Sathiyat, to the west of Salamiyeh area in Hama province, killing and injuring a number of terrorists and destroying their weapons.

SANA reporter said that other army units, in cooperation with the popular defense groups, on Sunday engaged in fierce clashes with terrorists of the so-called Jaish al-Izzah who attacked, from the direction of al-Lattmeneh, military points in the surroundings of Zilin village in the northern countryside of Hama.

The reporter added that the clashes left a number of terrorists killed while the rest fled away. The army units carried out intensive strikes on the direction from which the terrorists advanced to carry out their attack.

Armed groups also breached the de-escalation zone agreement north of Homs city by attacking a military position in the surroundings of al-Mesherfeh town.

SANA’s correspondent said that a Syrian Arab Army unit clashed with armed groups that attacked a military position near Tal Amri village northeast of al-Mesherfeh town, which resulted in thwarting the attack and eliminating a number of militants who had come from Salim Valley area east of al-Rastan city.