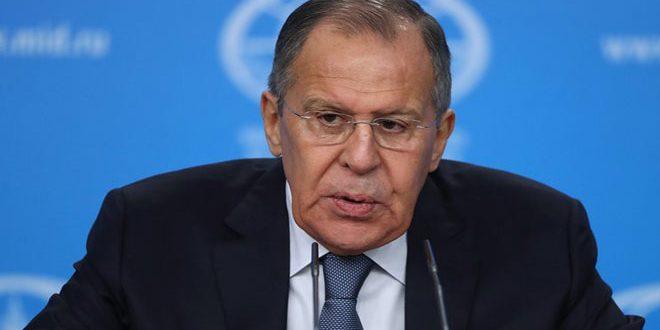 Moscow, SANA- Russian Foreign Minister, Sergey Lavrov, said that Syrian National Dialogue Congress held in Sochi has strengthened the work to build dialogue among the Syrians on the basis of UN Security Council Resolution No.2254.

During a press conference with his Italian counterpart, Angelino Alfano, in Moscow Thursday, Lavrov added that the Congress results would help revitalize Geneva political process.

“We expect that the results of this congress will help Staffan de Mistura further galvanize work of the Geneva process on negotiations between the government and the opposition chiefly to execute the constitutional reform,” he said.

Lavrov hoped that all spectrums of the Syrian society will participate in settling the crisis in their country, considering the Sochi Congress as a real opportunity.

Lavrov said that some opposition groups, positioned in Istanbul, went to Sochi and did not participate in the Congress for reasons unrelated to the settlement of the crisis and have returned to Istanbul after they delegated the Turks to represent them.
Lavrov said the discussions held during the Congress proved that this event was real as it gave the opportunity to the participants to present their viewpoints.

In turn, the Italian Minister voiced his country’s appreciation to the Russian efforts in holding the Congress, pointing out that Astana meetings are very important parts of the settlement process, which also incorporates the Geneva process.