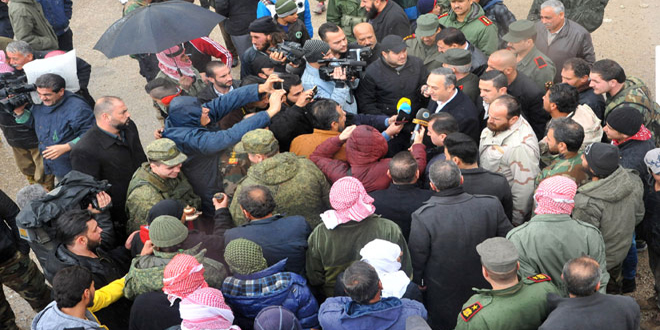 Damascus countryside, SANA- The displaced families continued returning to their homes in Beit Jinn and the surrounding villages and towns, on Sunday, after the Syrian Arab Army had completely restored security and stability to the area.

Governor of Damascus Countryside Alaa Munir Ibrahim announced from the village of Mughir Al-Mir that the governorate will start tomorrow Monday the rehabilitation of the infrastructure in light of the damage it sustained at the hands of the terrorist organizations, as well as will provide the citizens’ needs.

During a tour to inspect the situation of the towns of Mughir Al-Mir, Beit Jann farm, Beit Jann, Kafr Hawr, Beit Tima, Beit Saber and Sa’sa’, Ibrahim said that with the return of security and safety, the governorate in cooperation with the citizens and some international organizations, will start the process of maintaining the main services of electricity, telephone, water and sewer system.

The governorate will secure all needs of citizens, so that life comes back again to this area (towns and villages) which is considered one of the most important agricultural and tourist areas, he added.

In a statement to SANA, a number of citizens stressed that terrorism will not prevent them from living their lives, rebuilding their towns to become better than before, and supporting the Syrian Arab army.

More than 500 displaced families returned yesterday to their homes in Beit Jin town and farm in the southeastern countryside of Damascus after restoring security and stability to the area, as part of the agreement to evacuate the armed groups who want to leave, or settle their status.