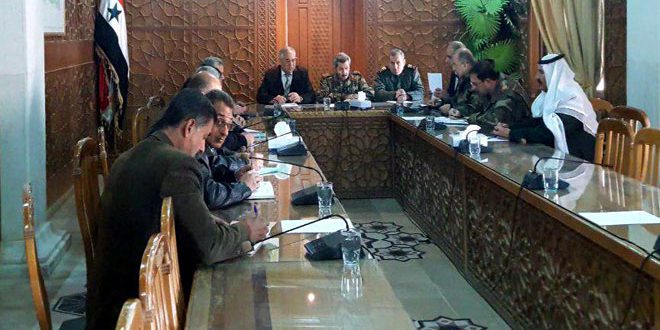 Deir Ezzor, SANA – The committee for the return of displaced people in Deir Ezzor confirmed that the authorities and the technical and engineering teams completed their work in clearing the eastern countryside of Deir Ezzor from landmines and IEDs, in addition to inspecting houses to assess their habitability in light of the damage they sustained at the hands of Daesh (ISIS)terrorist organization.

Deir Ezzor Governor Mohammad Ibrahim Samarah said that starting from next Tuesday, the residents of the eastern countryside will start to return to their homes and villages, and this includes both those who are living in temporary accommodation centers or residing inother provinces.

The Governorate, in cooperation with the authorities, will open a river crossing to receive citizens coming from the eastern bank of the Euphrates River, he added.

The Governor said that the main services including water, communications, schools, health centers, bread production plants, and police units are ready to provide the citizens’ needs, asserting that the committee will remain convened until the return of all people of the eastern countryside of Deir Ezzor to their cities and villages.